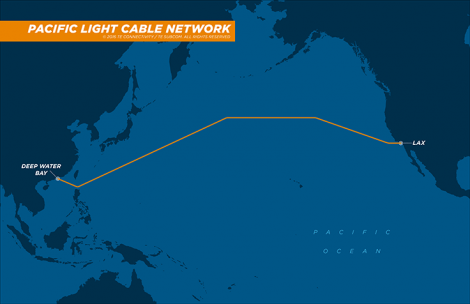 Google and Facebook are engaging in a partnership to pay for the laying of what will be one of the highest-capacity undersea data cables – piping data in the form of light all the way across the Pacific; bridging Los Angeles & Hong Kong.

This project is the second partnership Facebook has joined in. It is yet another current example recent big business in the submarine-fiber optic cable industry. This internet-centric industry has traditionally been dominated by group of private, and government, carriers.

Companies like Facebook, Google, Microsoft, and Amazon operate huge-scale data centers that deliver various internet services to people worldwide. These internet big boys have are quickly reaching a point where their global bandwidth needs are so high that it makes more sense for them to fund cable construction projects directly; rather than to purchase capacity from established carriers.

Previously this year, in May 2016, Facebook announced that teamed up with Microsoft on a high capacity cable across the Atlantic called “MAREA”. This cable will be linking internet backbone hubs in Virginia Beach, and Bilbao, in Spain. Telefonica will be administrating this future transatlantic data line.

Europe and the Asia Pacific region are important markets internet services giants. The MAREA cable will boost bandwidth levels between both companies’ data centers both in Asia and the US.

Both the MAREA and Pacific Light cable will be built by “TE SubCom”; one of the biggest names in the submarine fibre optic cable industry.

The 120Tbps (Terabits per second) PLCN system will provide greater diversity in transpacific cable routes, as Facebook recently published. “Most Pacific subsea cables go from the United States to Japan, and this new direct route will give us more diversity and resiliency in the Pacific,” Facebook’s article states.

One difference that PLCN and MAREA have from traditional transoceanic cable systems is they will be interoperable with different networking equipment; rather than being designed to function with specific or proprietary landing-station technologies. Companies will be able to choose what optical equipment best fits their needs best. When better technology become available, the companies involved will be able to change or upgrade that equipment – as better technologies becomes available. Equipment refreshes can occur as optical technology improves.

When equipment can be replaced by better technology at a quicker pace, costs should go down and bandwidth rates should increase more quickly.

Also earlier this year; Amazon Web Services made its first direct investment on a submerged cable – helping make the planned “Hawaiki” Submarine Cable project between the US, Australia, and New Zealand possible. Both before-mentioned cables are to be surfacing in Oregon.

Due to factors such as this, 4GoodHosting.com intends to continue serving websites all over the world, and reaching a larger, global market of new customers who wish to have their website hosted from Canada. (a most liberal, low-key & relaxed country)