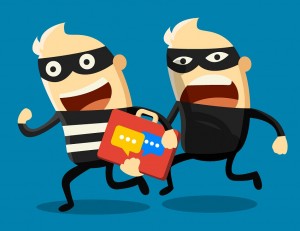 Companies were ranked based on their recognition of online threats to human rights, default deployment of end-to-end encryption, user disclosure, government disclosure, and publishing of the technical details of their encryption.

“If you think instant messaging services are private, you are in for a big surprise. The reality is that our communications are under constant threat from cybercriminals and spying by state authorities. Young people, the most prolific sharers of personal details and photos over apps like Snapchat, are especially at risk,” Sherif Elsayed-Ali, Head of Amnesty International’s Technology and Human Rights Team said in a statement.

“Snapchat” only scored 26 points in the report (out of 100) and Blackberry was rated even worse at 20 points). Skype has weak encryption, scoring only 40.

The report also stated “that due to the abysmal state of privacy protections there was no winner.”

On a side not protecting privacy rights is also part of the motivation behind the Let’s Encrypt Project, which to use to supply free SSL Certificates.

About the most popular instant messaging app: “Whatsapp” – Facebook has thrown everybody a new surprise twist.

WhatsApp is updating its privacy policy. Facebook wants your data and end-to-end encryption is going to soon be shut off.
WhatsApp , now owned by Facebook, started some uproar this week after the announcement that it’s changing its terms (or privacy) to *allow* data to be shared with Facebook. It means that for the first time Whatsapp will give permission to connect accounts to Facebook. This is after pledging, in 2014, that it wouldn’t do so – and has now backtracked.

WhatsApp now says that it will give the social networking site more data about its users – allowing Facebook to suggest phone contacts as “friends”.

“By coordinating more with Facebook, we’ll be able to do things like track basic metrics about how often people use our services and better fight spam on WhatsApp,” Whatsapp has written.

“By connecting your phone number with Facebook’s systems, Facebook can offer better friend suggestions and show you more relevant ads if you have an account with them. … For example, you might see an ad from a company you already work with, rather than one from someone you’ve never heard of.”

Many aren’t pleased with the move, especially since WhatsApp previously promised not to change its privacy settings.
If you want to carry on using whatsapp, you can’t opt out of the Facebook connection feature, as the update of terms and privacy policy is compulsory. “This allows us to do things like improve our app’s performance and better coordinate,” says WhatsApp.

The app’s end-to-end encryption will also be stopped. However previously the company implemented it earlier this year and claimed it made conversations more secure.

The Italian antitrust watchdog on Friday also announced a separate probe into whether WhatsApp obliged users to agree to sharing personal data with Facebook.

The European Union’s 28 data protection authorities said in a statement they had requested WhatsApp stop sharing users’ data with Facebook until the “appropriate legal protections could be assured” to avoid falling foul of EU data protection law.

WhatsApp’s new privacy policy involves the sharing of information with Facebook for purposes that were not included in the terms of service when users signed up, raising questions about the validity of users’ consent, known as the Article 29 Working Party (WP29), as the European authorities have responded with.

The Wp29 group also urges WhatsApp to stop passing user data to Facebook while it investigates the legality of the arrangement.
Subsequently a spokeswoman for WhatsApp said the company was working with data protection authorities to address their questions.

Facebook has had run-ins with European privacy watchdogs in the past over its processing of users’ data. However, the fines that regulators can levy are paltry in comparison to the revenues of the big U.S. tech companies concerned.

The European regulators will discuss the Yahoo and WhatsApp cases in November.

“The Article 29 Working Party (WP29) has serious concerns regarding the manner in which the information relating to the updated Terms of Service and Privacy Policy was provided to users and consequently about the validity of the users’ consent,” it writes.

“WP29 also questions the effectiveness of control mechanisms offered to users to exercise their rights and the effects that the data sharing will have on people that are not a user of any other service within the Facebook family of companies.”

We haven’t heard of any discussion within Canada as of yet.

Thank you for reading the 4GoodHosting blog. We would love to hear from you.