What’s in a ‘Tweet’: Understanding the Engagement-Focused Nature of Twitter’s Algorithm 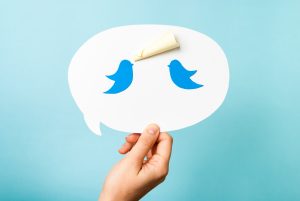 It would seem that of all the social media platforms, Twitter is the one that businesses struggle with most in understanding just how to harness it for effective promotional means. The common assumption is any shortcomings are related to your use of the ever-ubiquitous #hashtag, but in fact they’re not nearly as pivotal as you might think.

Here at 4GoodHosting, we’ve done well in establishing ourselves as a premier Canadian web hosting provider and a part of that is sharing insights on how to get more out of your online marketing efforts. Social media is of course a big part of that, and as such we think more than a few of you will welcome tips on how to ‘up’ your Twitter game.

It’s easy to forget that these social media platforms have algorithms working behind them, and working quite extensively. What’s going on behind the screen controls and narrows down what you actually see on your timeline.

For example, let’s say you have specific political affiliations. The algorithms ensure that the majority of the tweets you’ll see will be linked to that party’s views. Or perhaps you’re especially into sports. If so, plenty of sports news sources will be all over your timeline. Oppositely, if you dislike something then that theme will slowly end up disappearing over the course of the week or beyond.

All of this is a reflection of ALL social media platforms, Twitter included, are using more and more complex algorithms to satisfy their user base and deliver content they are likely to find favourable.

So this is what do you’ll need to know about Twitter’s algorithms, and the best ways to use them to your advantage.

Keep Your Eyes Peeled For These

There’s no disputing the fact that Twitter has faded quite considerably in popularity and the strength of its reach. Despite this, Twitter is really narrowing its scope of engagement and a key way to increase engagement is through increasing relevance of the posts seen.

Directly from Twitter’s engineering blog, here are a few of the factors that decide whether a Tweet is sufficiently engaging and thus worthy of ‘appearances’

Twitter will then recommend people to like over the next couple of days. Depending on your responses to those recommendations, it will then adjust the content that’s seen by you to better reflect how it is gauging your preferences.

What’s easy to conclude is that users themselves play a predominant factor in what’s going to be seen on their timelines. Liking or using the “I don’t like this” button once or twice goes a long way in this regard.

By this point it begs asking the question; is Twitter’s algorithm perhaps a little too simple? It is definitely not as complex as other media platforms such as Facebook, but the benefit in that is that it is easier to manipulate. Among the many benefits of this is the way that smaller companies may tag a random brand or company in a tweet that is completely non-associable with their tags. Twitter’s algorithms allow this to be a very effective means of getting increased exposure.

Generating engagement with your tweets is a reliable way to boost exposure and put yourself on top of the algorithm game. Engaging your audience and boosting exposure keeps you ‘in’ the talk and seeing to it you’re using the correct hashtags will ensure you’re being talked about.

Smaller companies can benefit from tagging large companies in their tweets to gain exposure, and that’s especially advisable if the company relates to what you’re talking about. Sure, it only works to a certain degree, but gaining followers by any means possible is always a plus.

Putting all this talk about engagement into perspective, it’s important to understand how to spark the right sorts of conversation. Asking random questions will make it look forced, while if you don’t interact at all you may see a dip in exposure. Find a way to be genuine in your responses, and adhere faithfully to what you’ve defined as your brand’s voice.