Here at 4GoodHosting, we’re a reputable web hosting service provider in Canada and we like to think we’ve got our thumbs sufficiently on the pulse of what’s new in the digital marketing world too. The ‘stack’ we’re going to talk about today is all about computing and the new way in which cloud computing, in particular, has revolutionized the way people access and utilize resources made available through the internet. We always have tips for improving your online marketing presence, but this blog post is really more about some of the more notable developments in cloud computing as they pertain to business.

The Cloud is a broad collection of services, and these days there’s plenty of options in regards to the way you can optimize them for the benefit of your company and organization. The stack is the broad range of services built on top of one another – thus the stack. Each one owes much of its stability and practicality to the one underneath it, as we’ll highlight shortly.

Services make the grade as ‘Cloud’ worthy when they feature: 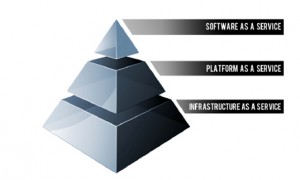 SaaS is software that’s deployed over the internet. To put it in more understandable terms for consumers, it’s embodied in the new phenomena where you don’t need to go and buy a physical hard copy of a software suite complete with install disc and take it home to then install on your computer. Rather, you sign up, pay your initial monthly fee, and nearly instantaneously you’ve got access to it.

Keep in mind however that not ALL softwares are well suited to be made available in a SaaS model. One that are suited will be (among other characteristics):

PaaS is any computer platform that allows the quick and easy creation of web applications without the complexity of purchasing and maintaining infrastructure that must be in place beneath it in order for it to be functional / operational.

Simply, it’s a platform for the creation of software that’s delivered – ready made and ready to work – quickly and easily over the web.

PaaS products will be especially practical in any situation where multiple developers will be proceeding to work on a project, or where external parties must interact and work collaboratively within the development process. These models have been very well received in instances where a valuable data source already exists and the aim is to create new applications which leverage the established value of that data. PaaS is also expected to ease difficulties around rapid deployment and iteration of software.

IaaS is any proven method of delivering the servers, storage, networks, and operating systems of Cloud computing as an on-demand service. It’s obtained as public or private infrastructure, or a combination of both (very common, and also known as ‘hybrid cloud’).

IaaS products will be a good fit in any situation where

It’s a fact that Cloud computing is a rapidly accelerating revolution within the entirety of the IT world, and we imagine it will become the default method of IT delivery in the not too distant future. Becoming familiar with it is highly advisable!