Message from Tim Berners-Lee, a computer scientist who made the first ‘web server’ program in 1990. 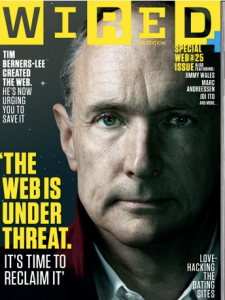 Forward: There seems to be quite a lot of confusion around regarding the origin of the internet, which has been around since the 1960s, and began as a US DoD project known as ARPANET, and the origin of world wide web, which has only been around since about 1990. Mr. Berners-Lee, a former employee of CERN and Belgian computer scientist Robert Cailliau proposed in 1990 to use hypertext “to link and access information of various kinds as a web of nodes in which the user can browse at will”. The first web browser and web server was created by Mr. Berners-Lee using a Next workstation. Long before the web, the internet existed in the form of newsgroups, e-mail, and FTP sites for exchanging files.

Tim, currently aged 59, is a director at the World Wide Web Consortium ( http://www.w3.org ), a think-tank which publishes guidelines for the future development of the world wide web.

So the British man generally mistaken or over-rated “inventor of the internet” is still quite great guy regardless because he is using his status for the protection of internet freedoms.

On Saturday the 27th of September, at the London ‘Web We Want’ festival concerning the future of the internet, he gave a speech asserting that freedom over the internet is under attack/threat by governments and corporations who are in many ways independently and jointly interested in controlling the web; for additional profit and also tightened over-control over all our lives.

He called for a “Bill of Rights” that would guarantee all of us independence on the internet and protect end-user privacy. Much like an internet version of the Magna Carta, a famous English charter from the 13th century enshrining and guaranteeing basic rights & freedoms.

“If a company can control your access to the internet, if they can control which websites they go to, then they have tremendous control over your life,” he went on to say … “If a Government can block you going to, for example, the opposition’s political pages, then they can give you a blinkered view of reality to keep themselves in power. Suddenly the power to abuse the open internet has become so tempting both for government and big companies.”

Recall the name “Edward Snowden”? He was the former NSA employee who copied many gigabytes of sensitive documents onto a tiny memory card and snuck out of work with it. He flew out of the country, then published many of those documents showing how government(s) have been illegally spying on you through the help from most major internet brands that you are aware of. It turns out that those companies currently know much more about what we are looking at, thinking about, and doing that we know what them – and they have let governments tap into all that endless information – without our permission.

Also a recent ruling from inside the European Union allows individuals to ask search engines, such as Google, Bing/Yahoo, Ask.com, to remove links to information about them, so-called the “right to be forgotten”. This has as also raised concerns over the potential for abuse and general censorship.

“There have been lots of times that it has been abused, so now the Magna Carta is about saying…I want a web where I’m not spied on, where there’s no censorship,” Mr Tim Berners-Lee stated to the cheering crowd.

In conclusion he said “Now some things are of course just illegal, child pornography, fraud, telling someone how to rob a bank, that’s illegal before the web and it’s illegal after the web.”