Even Homeland Security Says Not to Use Internet Explorer 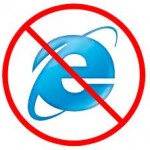 Homeland Security Advises Not to Use Internet Explorer

It’s very tremendous to come to know about Internet Explorer. Even the government of the United States do not like to use IE until they get a new browser that does not have any problem.

The version that brings the problem is version 6 and beyond. These versions enable people with malicious intentions to get into a PC through a bad website. The security firm that deals with these issues is known as “Operation Clandestine Fox” by the Fireeye. The threat is true and is dangerous.

The department of Homeland Security in the United States issued security alerts to computer software many times. But this time they acted differently. Multiple number of agencies of the government use IE versions.

We advise users to use another internet browser until a new official update is available.

Microsoft’s schedule will be available until May 13. The company may release an unscheduled update before this date. If you use an unsupported form of Windows such as Windows XP, you’ll not get any update.

And, if you’re looking for hassle free things, choosing Mozilla Firefox could be an optimal solution.