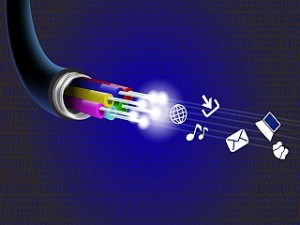 In all this talk about, servers, databases, cloud storage etc etc., fibre optics have been a bit of a lesser light despite being the unsung hero in the successes we’ve seen in the supercharging the digital world. Now some of you will know what a Terabyte is, and others won’t. Most of you will be familiar with a Gigabyte though, and a Terabyte is 1,024 gigabytes.

That’s a lot of capacity, and with that understood fibre optics cable these days can achieve transfer speeds up to 255Tbps. Simply put, that’s blazing fast and nearly every Canadian web hosting provider we don’t overlook the value those transfer rates have in letting us work with our clients in making their websites – and in the bigger picture their online marketing efforts – really pay off.

What’s different nowadays is that it’s not just one single-core fibre. Fibre optic cables now feature a multi-core glass stem that allows for an enormous load of data to flow through it. While this technology is still a long way off from being used extensively throughout cities, it’s setting the tone for the newer upgrades poised to hit the fibre optics market, and they’re not far off.

Many cable providers plan to upgrade their lines, with some of the major cities in the world soon to see cables capable of handling 400Gbps. That’s a huge upgrade from the current standard of 10Gb/s that many companies use. The newer fibre optic cables also include a host of upgrades and capabilities that really outdistance them from their predecessors. Here’s a quick reference of the improvements:

Security – The integrity of an optic cable actually plays a role in how easily hackers can force their way into data stores. Now, fiber optic cables use light. That makes it tough to ‘grab interference’ as the term goes. About the only way to break into them is to physically break the cord. Since they use light to transmit data, all of the light escapes and makes it easy for network security to notice breaches in data.

Design and Speed – These newer materials are lighter and thinner too. They can be more easily wrapped in a protective coating and hung from poles. In North America the majority of wires are still suspended from poles and not buried in the ground, so weight is a major issue. The reduced weight also allows them to be thicker, which means more data transfer.

Reliability – Since all of the data is transferred through a core of glass, it’s by in large entirely insulated from any threat that might interrupt or shut down transfer. There’s no fear of electrometric interference or radio-frequency interference, otherwise known as EMI and RFI. There’s also very little risk of impedance or crosstalk. Although it’s still susceptible to temperature changes, it’s more reliable when running through water or industrial equipment.

New fibre optic technology continues to expand in leaps and bounds, and it’s not a moment too soon with the way demand for internet usage continues to skyrocket in North America. The aim course is to reach the point where the world is full of nearly instantaneous data transmission, and with us being as much as an eager beaver as can be when it comes to web hosting and online communications – that sounds pretty darn great!