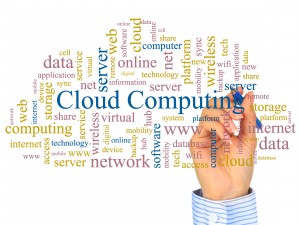 Anyone familiar with the acronym ARPANET? Perfectly understandable if you aren’t, even many in the IT World likely wouldn’t have a clue.

So let’s introduce ARPANET and it’s significance to one of the more predominant technical developments in computing these days.

ARPANET is the network that became the basis for the Internet, and began with the interconnection of four university computers in the late 60s. ARPANET sent information in small units called packets that could be routed on different paths before being reconstructed at their destination. The development of the TCP/IP protocols in the 1970s made it possible to expand the size of the network in a much more orderly way.

The initial purpose was to communicate with and share computer resources among users at the 4 different connected institutions, and with that connection the application principle behind cloud computing was born.

Today, we often hear the term “It’s in the Cloud” or “that’s Cloud based”. But what does that mean exactly (and as some might ask, ‘why is Cloud capitalized?’)

To put it simply, data existing in a cloud simply means that it exists on multiple computers at once. Before understanding cloud technology you’ll need to have a basic grasp of server technology. Servers are powerful computers, similar to the technology in a desktop computer, just must more dynamic. When you take all the CPU power and memory of a server and make it a virtual server, the advantage becomes that it doesn’t physically exist anywhere, and can be moved from one host to another as needed and automatically.

This is the “Cloud”. The virtual server that is created can move from one host to another as needed and be given more resources or drive space by grabbing more from the storage servers, known as SANs (Storage Area Network).

So despite being 48 years in the making, it’s only in the last 15 years or so that Cloud computing has established itself. Even that number may surprise some who would think it’d be much less given the ‘newness’ of the technology to the public. In the early 2000s, Clouds were used, but they were more privatized. A single company might have a datacenter that contained clusters of physical and or virtual servers where they host websites, email, or in-house applications for clients.

It was 2007 when we began to see the advent of public cloud space services such as Dropbox and Google Drive. Users were now able to house their personal files in a secure space. Basically, these spaces are folders that exist within a company’s data centres. This data is hosted in clustered environments so that their users can enjoy guaranteed uptime and recovery. Existing in these datacenter’s virtual spaces also allows the data centres to offer their services for very little cost, or free, if the space is small enough.

Further, we now have cloud-enabled services such as Google Apps Marketplace and SaaS (Software as a Service) products like Microsoft Office 365. These new technologies allow the cloud to be, not just a place that you can store data, but utilize entire applications and services such as word processing, spreadsheets, CRM programs, creative suites – you name it.

As this technological entity is still evolving, we continue to see new developments but none is as significant as the trend towards mobile device optimization. Clouds may merge more aggressively and we may also see the forced de-privatization of clouds as larger companies force small and medium-sized businesses to bring their data into these more expansive environments in an effort to reach prospective customers more effectively.

Choose 4goodhosting.com and have a web hosting provider that has their thumb on the pulse of digital marketing and web hosting trends.