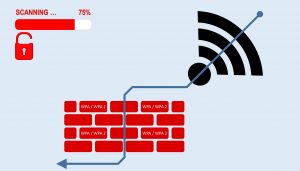 This past week has seen an explosion of cautions extended to people using home Wi-Fi networks (which of course is pretty much ALL of us) regarding a security risk that makes private information and personal content increasingly vulnerable to theft or misuse. It’s certainly not the first time such an issue has come to the attention of the digital world, and it won’t be the last. This one, however, is particularly noteworthy given the fact that it has such far-reaching and widespread potentially negative implications for anyone who’s on the web via a Wi-Fi connection – at home or elsewhere.

Here at 4GoodHosting, we strive to be on top of trends and developments in the industry to go along with being a premier Canadian web hosting provider. This ‘heads up’ should be especially welcome for business owners operating an e-commerce website, but we imagine it’s going to also be well received by your average web browsing guy or gal as well.

Malevolence from your Modem?

Credit for catching this new flaw goes to a team of Belgian researchers. They’re the ones who recently discovered a security vulnerability in the WPA2 protocol. The WPA2 protocol is a system of rules that dictate how your Wi-Fi networks function and behave. As mentioned, it’s a near ubiquitous and wide-reaching ‘standard’ – it’s installed and in use with almost every single modern Wi-Fi modem or router. We’re going to go ahead and assume that includes you, and as such this warning is one you’ll want to take note of and follow the precautionary measures we’ll lay out here.

The research has indicated that there’s a loophole in the WPA2 rules that’s creating the possibility for hackers to tap into a Wi-Fi network and grab sensitive information that’s being relayed back and forth over it, with one example (and likely the most disconcerting of all the possibilities) being stealing your credit card details when enter them in the process of buying something online. Another possibility could be snagging your password when you enter it into the login for a particular website.

Here is a good read on the issue in detail, via the official website.

Who’s Most at Risk?

Plain and simple, the answer here is as suggested above. Meaning pretty much everyone is at risk. That’s because WPA2 is the most common protocol utilized with Wi-Fi modems and routers these days, and has been for quite a while.

We’ll also go ahead and assume the majority of you are relatively computer savvy, but for those of you who aren’t you can easily determine if that’s the case by looking under computer>system preferences>network connections and then have a look at your Wi-Fi network settings. It’s nearly certain you’re on a WPA2 network, so read on.

Your Best Course of Action

Modem and router manufacturers are very much aware of this issue, and are working hard to make patches for their products available to their customers.

We recommend a visit to the website of the manufacturer of your Wi-Fi modem or router. Determine if they have released a recent update for your model (look for a date within the last month or two). Check out this list of popular modem & router manufacturers to determine whether or not a suitable patch is already offered to protect your make and model against this vulnerability.

Some of you may not be able to install an update for your modem or router on your own. If so, not to worry – most manufacturer’s websites offer support guides, or the option to call them for technical support.

It shouldn’t be necessary. Your Wi-Fi network isn’t a factor with this particular security flaw. You’re fine to leave it as it is, and that’ sure to be welcome news for most of you who’d rather not have to create a new one.

This threat gains access to networks via non-primary means, and to use an analogy it’s like a burglar who comes in through a window or down a chimney rather than front door of your house. Your password is guarding your front door, but that’s not where you need to be concerned.

We’ll continue to monitor developments with this new WPA2 security threat and keep you informed as necessary. Be a little proactive on your own part with the recommendations above and you should be good to continue enjoying wireless Internet.