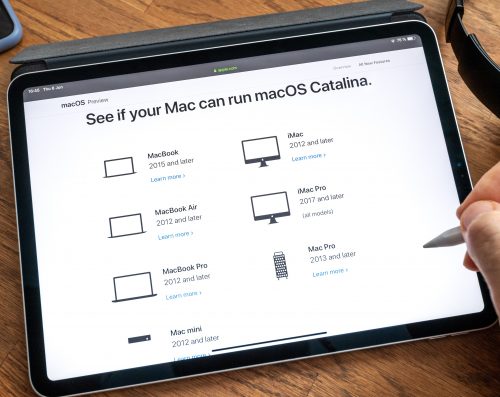 It may be the name of a particularly scenic island off the Southern California coast, but Catalina is now also the name of the newest Mac OS that has recently arrived. Like any successful company they’re not ones to rest on their laurels at Apple, and as such these new and improved operating systems keep on coming. For most Mac owners that’s a good thing, and there’s a LOT of R&D efforts and budget directed towards determining what new wrinkles users will find most appealing.

Here at 4GoodHosting, we imagine that nearly every other quality Canadian web hosting provider is also going to be taking note of the new features seen with Mac OS Catalina. Considering that Macs are the computers of choice for people who employ their devices for creative purposes, we can go ahead and assume these development will appeal to enough of our customers that they’re definitely worthy of a blog post.

So let’s do that here today – have a look at the Top 5 New Features with Mac OS Catalina.

With its release, the new MacOS brings with it a laundry list of changes, including a host of new features, a few updated apps, and the demise of a beloved app. But among these features, five really stand out from the rest. Here are the five best features in MacOS Catalina.

To be certain, there are a LOT of people who are none to pleased to have heard of iTunes’ coming demise. Whether or not that’s going to be problematic for you, the general consensus is that over time these users will also come to appreciate the appeal of what’s being introduced here with Catalina as it regards entertainment via the devices.

Beginning with Catalina, iTunes is will be replaced with Apple Music, Apple TV, and Apple Podcasts apps. And, in our opinion, if you’re open to new things you’ll quickly come to see how this is all a good thing.

The general consensus is that the Apple Music app is lightning fast and will provide users with a library of some 50 million songs, playlists, and music videos. Plus, Apple Music users will still have access to the iTunes music store. The Apple TV app will support 4K HDR and Dolby Atmos, and the over 100,000 iTunes movies and TV shows now available for rent or purchase is something that promises to go over VERY well with Mac Users who love entertainment on-demand.

Apple TV+ is their new original video subscription service, and podcast fans will love how the new Apple Podcasts app includes a catalog of over 700,000 shows. Go ahead and search for podcast episodes by host or discussion topic and you’ll like how machine learning gets you to your podcast of-choice that much more quickly.

Equally worth of the most fanfare here is MacOS Catalina’s second screen support for iPads – Sidecar. This new feature allows Mac users to utilize their iPads as a second screen with their Macs for any task where two displays are preferable. Sidecar can be incorporated in two different ways; dragging windows from your Mac to your iPad and using the pad just as you would any external monitor, or pairing your iPad with Apple Pencil to make file changes that are then reflected on the primary display seen on your Mac.

It will be possible for you to use Sidecar wired or wirelessly. Do note, though, that for the wireless version to work you must be within ten metres of your Mac. There is also support for Touch Bar provided the apps you’re using with Sidecar actually support Touch Bar.

Sidecar promises to be very popular with people who write extensively with their Mac and would prefer not to have to be referencing on the same display. Of course, there will be many other appeal points for it too. Which leads us to number 3 here..

Another sure-to-appeal aspect of Sidecar will have a lot of promise for artists, designers, and illustrators. Once you connect your iPad with Sidecar, you can take your Apple Pencil and draw and annotate things directly on that iPad.

Needless to say, many people will be abandoning their Wacom tablets and enjoying the direct-source productivity made possible by Catalina OS and Sidecar in this way. The ability to directly edit creations with Photoshop or Illustrator without having to import a file to the device is something that’s definitely going to be well received.

Here’s the one new feature with Catalina that is bound to be getting top marks from parents. Managing the family’s screen time is made a lot easier now that the Screen Time app has become standard with a new MacOS. Catalina’s Screen Time lets users set limits for app accessibility and time usage across all of your Apple devices – not just your Mac.

Screen Time will also generate usage reports, and it also boasts a ‘ One More Minute’ feature that provides users with a small amount of extra time to wrap things up if that’ what they need. It also allows users to set communication limits whereby you can control who is able to communicate with your kids, and when they can do that.

Apple has done well with the way they have revamped the Photos app in their newest operating system, Catalina. The most notable change is the way that it curates and features your best photos for you, doing so while removing poor-quality photos and duplicate shots at the same time without you having to do that manually on your own.

The Photos app also now generates much larger previews for photos, and machine learning helps your OS to be ‘smart’ about highlight important moments and memories. In addition, Live Photos and videos can now be auto-played while users scroll through their photo library.

We’ll conclude today by saying we’re aware we did this same type of commendation for Mojave OS not so long ago, but perhaps the fact that we’re doing it again (and will be in the future too likely) suggests that they do what they do exceptionally well down there in Mountain View, CA.